School Coming to a Close

Well it looks like school is coming to an end as graduation is just around the corner. I just finished up my last exam and now I am preparing to graduate this weekend!

Quite a lot has been going on for the past month and I have been neglecting to find time to post on the blog. I have had a few projects for classes including writing a micro-code cpu using RIT's Arch Lib Package. So that has been taking up a lot of my time.

Outside of my class projects I have been working with Professor Jacobs to introduce a group of girl scouts to programming and game creation through Scratch. Jacobs has in the pasted used Game Maker and wanted to move to an easier to use open source solution. I have taken these tutorials and made similar tutorials for scratch. Some problems that arose were that Scratch is very simplistic where some of the game tutorials had features that were not available.

The second game was a bit more complicated as it required a moving camera. As Scratch doesn't have a concept of a camera this was not directly possible. The game had a canoe that was paddled by the user to avoid the walls and get to the end of the level. Instead, I had added in objects that user needed to collect and avoid instead of walls. When playing the player gained points by collecting items and the game would end when the canoe collided with an obstacle.

After the two tutorials were written we had a workshop day where we hosted a few girl scout troops. They had a lecture by Jacobs about what makes a game. From there we let the girls play around with a few flash games with different game dynamics and then had a group wide discussion. From there the girls had lunch while hearing and interacting with some successful women in the game industry.

From lunch we introduced them to Scratch and let them go through our tutorials. Overall I think the tutorials were successful. Some of the girls got distracted by the ability to create custom images and designed, but eventually got back on track. In the end a few of the girls were even experimenting with creating their own games. Overall I think that was a huge success.

Outside of that and classwork, I have been working in the Center for Student Innovation on a few projects. One of them being the re-branding of the CSI. 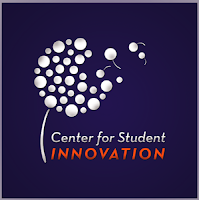 Our artist made a new logo and sent me an image of what the site should look like. This is not best way to make a new template but I was able to manage. At the same time we were re-branding, we migrated our site from a wordpress over to a drupal instance. We felt that our landing page for the center should not be blog styled website and more informational.

As I have been getting closer to graduation I have been putting applications into a few places for work after I leave RIT. I am hoping to land a job somewhere that respects and embrace open source.

Well I hope this is a decent update, hopefully now I will be able to post more often now that I don't have so much to do. Done classes and exams, just a few days for graduation!
Posted by Unknown

Email ThisBlogThis!Share to TwitterShare to FacebookShare to Pinterest
Labels: FOSS at RIT