July 8, we had our hackfest at the OLPC headquarters. Foss at RIT had sent three of their coding teams and one of our storytellers to this event. The primary focus of this hackfest was the Open Video Chat activity with Fortune Hunter and CIVX as secondary topics. 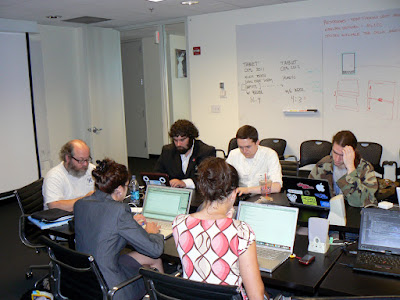 (More pictures of our trip)
(More Pictures at the hackfest)
Once we got settled in the board room, we found that our foss.rit.edu server was down. The server is hosted in RIT’s Computer Science House server room. Apparently they had a computer overheat and went into panic mode shutting down some of the servers and networking hardware to reduce heat due to this heatwave we are having. This was an inconvient time as our hackfest goals, irc bot, and dev enviornment of CIVX was hosted on this box. Luckily my personal server at rit was online and had a copy of our Drupal database for the goals, and had an irc bot ready to go. As for CIVX, distributed revision control through git was a life saver.

Open Video Chat’s goals at the hackfest was to get a telepathy-farsight implementation of the chat system working. We didn’t get any fully working code out of the hackfest, however we did get a much better understanding of the telepathy-farsight stack thanks to Daf’s physical presence at the hackfest. His insights of telepathy were very helpful and will be very valuable in the next coming week. Fran has been working at understanding the dbus and telepathy stack for the past week which this hackfest seems to have been exactly what he needed to understand how all of the components need to work together. We were playing with telepathy and empathy to programically start a video call between two computers.

This is important because this shows we are gaining an understanding on how the parts of telepathy work together. We were still using empathy to accept the video connection, but that is a start. We have decided we need to step back a bit and rebuild our stack. We are thinking of starting off by using some network/telepathy tube negoation from existing example activities like chat. By doing this we will build our stack with small peaces of the networking stack at time.

We also spend a portion of the time working Sjoerd Simons in the telepathy irc channel working around known bugs that have not made it into the main repositories. One aspect of sugar that I’m worried about is they are using older versions of fedora that have reached the end of their support life cycle, so some of these bug fixes may not be included in some of their current versions.

The art team of MAFH spent their time deciding how they want to build their animation system. It seams that they have decided on building some supporting classes that will make animation easier in pygame. These classes will hopefully be easily supported in the game engine. I am not too sure of the current status as I am working mostly on the engine.

The engine got a little bit attention druing the hakfest at the end. I broke apart the inspection system into a new class that is not specific to the engine. This could potentially be helpful to someone else in the future. I also added the ability to set the frame rate cap and animation mode in the constructor of the main engine.

The CIVX team spent most of their time working on their people widget. It has now been added to the front end of the dev enviornment and will hopefully be pushed to the main server. There was also some scraper work by the team, but due to the server being down their work was crippled.

CIVX has been wanting to add more servers at alternate locations for some time. Due to this issue with CSH, it looks the the primary server may be moved into a facualty server room at RIT where the network is in “production” instead of CSH’s “learning” enviornment.
Posted by Unknown

Well, Sugar is an upstream project just like telepathy or VideoChat, Sugar doesn't use any distro, instead distros ship Sugar.