Fortune Engine profiler and other projects

Yesterday I resolved the profiling ticket (ticket 31). This adds a basic profiling system to the game that can be run through the game console 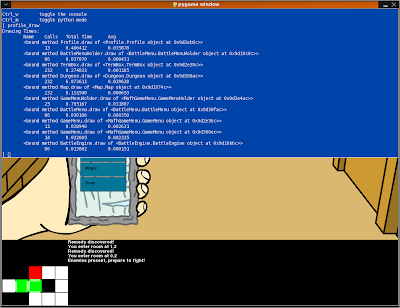 This introduced a bug that I fixed today (changeset).

Kevin and I also started working on our paper for the symposium at the end of the semester.

Aside from Fortune Hunter and the Engine, I have also started working on porting Nate's Lemonade Stand game over to the engine.

Python backwards compatibility drives me nuts. The xo 1.0 runs python 2.5 or older where the newer ones use python 2.6. In the game engine I was using the keyword "as" in the exception handler where in python 2.5 the keyword is ",". So I had to make a commit to convert all my code so that it doesn't use the newer "as" keyword (changeset).

Pygame has a similar issue... I had to remove using pygame.Color and just use the tuple format for the rgb color values in our game (changeset 1 and 2)

Other then that, I have also been helping Taylor on a project for the CSI. This project is like making a facebook/social networking site driven around projects and events.
Posted by Unknown